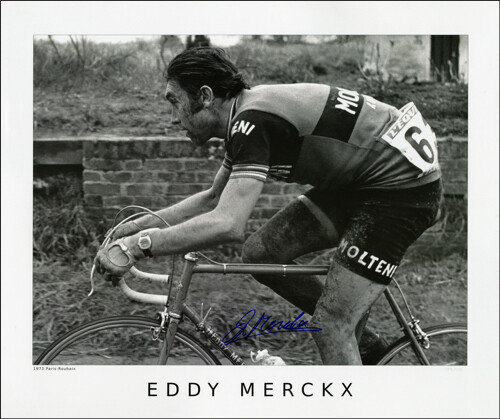 The spring classic Paris-Roubaix is fondly known as the Hell of the North. The race, one of road racings oldest, is often wet and muddy and takes the riders over many rough cobbled roads.

In 1973 the, 71st edition of the race, it was down to Roger de Vlaeminck and Eddy Merckx, with 44 km to go the injured de Vlaeminck could no longer hold on to Merckx’s wheel. Merckx rode 44 km solo to victory in the Roubaix velodrome.

Merckx was in extraordinary form in 1973, during a span of nineteen days, Merckx won Gent-Wevelgem, Amstel Gold, Liège–Bastogne–Liège, and Paris–Roubaix. His form continued and he went on to become the first rider to win the Giro and Vuelta in the same year, with only 4 days between the two races.

Each 24″ x 20″ lithograph has been personally signed by Eddy Merckx and comes with a certificate of authenticity from The Horton Collection.

IMPORTANT: THIS PRODUCT IS DROP-SHIPPED DIRECTLY FROM HORTON COLLECTION!

Save this product for later

FOR ALL SUBSCRIPTION QUESTIONS big or small, please TELEPHONE: 866-441-8636. To check your subscription status go HERE.

THE PELOTON MAGAZINE SHOP: Get everything PELOTON magazine here, including kits and most back issues, and casual apparel.

TO SUBSCRIBE: To subscribe to our monthly print magazine, go to pelotonmagazine.com Sign up for THE OPEN ROAD NEWSLETTER to stay in tuned to all things cycling here.